The Magic of Whole Cluster Fermentations

Learning the art of winemaking has been one of the more fulfilling adventures I have undertaken in this life. And my exploration of the use of whole clusters in fermentations has been one of the more compelling parts of this grand adventure. I was originally coached in the use of 100% whole berry fermentations (destemmed, but with intact berries), and so my adventure humbly began there. Sometime around 2012 I finally woke up to the possibility that whole clusters might make for better wines. Of course, I had tried many wines that were made with whole clusters. Some exposed the potential downside of excessive astringency, while others were nothing short of extraordinary and ethereal creations. The last thing I wanted to do was to take some amazing grapes that we worked hard for and compromise the finished product with astringent tannins that never really go away.

In the 2012 vintage, I just stuck my toes in the water with Pinot Noir and used varying quantities of whole cluster so that I could compare the results. Some fermentations were 100% whole berry and some were up to around 75% whole cluster. The lots were kept separate as they were pressed off to barrel so that we could see how they evolved over time. As the 2013 harvest season was approaching, we took another look at these various lots and nearly without exception we liked those with more whole cluster better. We decided to try some lots in 2013 that used 100% whole cluster and some with less. These experiments were once again focused on Pinot Noir which was a fortunate thing as it really does lend itself to whole cluster – if the conditions are right.

This last ‘if’ is a big one. And it has taken us another five years of working with whole cluster with different vineyards, varietals and vintage conditions to really start to understand when it works best, what to watch out for, and when to avoid it. Let’s take a quick look at Pinot Noir to understand what helps it work so well in our wines grown in our region.

In our relatively cool coastal region, the picking decision is not driven by acid levels so much, but instead by physiological ripeness and color. We are fortunate to be in one of the cooler parts of California, and that we work with vineyards that are largely dry farmed. Both pieces are critical to proper stem lignification. Lignification is the key to the success of whole cluster fermentations, so understanding it is essential. Lignification is when the shoots on the vine turn brown as the vine transitions from vegetative growth to ripening the fruit and eventually, heading into dormancy. When the shoots lignify, this signifies that the sap that was driving vegetative growth is no longer running. This sap is extraordinarily astringent and is the thing to avoid getting into your wine.

Lignification is influenced by a variety of factors and all of the stars need to line up correctly in order for the stems to be fully lignified at harvest and not bleeding astringent sap into the wine. Dry farming and deficit watering helps the vines lignify sooner resulting in stems that are fully lignified at harvest. Lignification is also influenced by vine age. Young vines tend to continue vegetative growth later into the season with the result that the fruit might be ripe, but the stems have not lignified. We have found that whole cluster works best with vineyards that are at least 10 years old. Additionally, vineyard management can impact whether there are non-lignified stems at harvest. If short, stunted shoots are not removed and are allowed to carry fruit, these usually doe not lignify. Lastly, it is possible that the fruit just ripens too quickly, but that stem lignification is lagging (a potential issue in really warm areas). So, it is always better to have a micro-climate on the cooler end of what is required to get a varietal ripe, both to retain higher acidity and to fully lignify the stems by harvest.

When the stems are lignified, the impact they have on the wine in whole cluster fermentations has less to do with what they impart and more with how they change the fermentation kinetic (cooler, and longer with slightly more intra-berry fermentation). Lignified stems do not impart greenness or any astringent tannin, but instead a subtle, but present fine and dense tannin that improves body and mouthfeel. In other words, if the stems are ripe enough, they will call very little obvious attention to themselves in the finished wine. And if they are not well enough lignified, you will end up with astringent, green tannins that color the wine. And since we are striving for transparency to site, we have to be very cognizant of stem ripeness and the factors which can influence it. Some winemakers think they don’t want to color the wine with any greenness from the stems, so they only use say 15% whole cluster. In actuality, if the stems are lignified and ripe, then using 100% whole cluster will not impart any greenness or obvious stem character to the wine. And, if the stems are not lignified, then using even 15% might impart noticeable astringency and greenness. This all boils down to one simple maxim – know thy stems.

With the right vineyard, the stem inclusion simply creates a more aromatically and texturally complex wine while the specific elements hinting at stem inclusion fade into the background with time. Those who have been fortunate to taste them know how many epic Grand Cru Burgundies there are that were made with 100% whole cluster that with 10-20 years in bottle are simply magical, ethereal bliss bombs that do not in the slightest evoke stem qualities (DRC, Dujac among others). It is important to note that to get the full benefits of whole cluster in the finished wine, one needs to be patient. It usually takes at least two to three years to the tannins to begin melding together in the wine and building larger molecules and better mouthfeel. It is possible that whole cluster wines show some ‘green’ attributes when they are young, or maybe just higher tonalities that might come across as shrill. However, a few years of bottle age and these qualities diminish while the favorable qualities of mouthfeel and ethereal aromatics come to be more dominant. 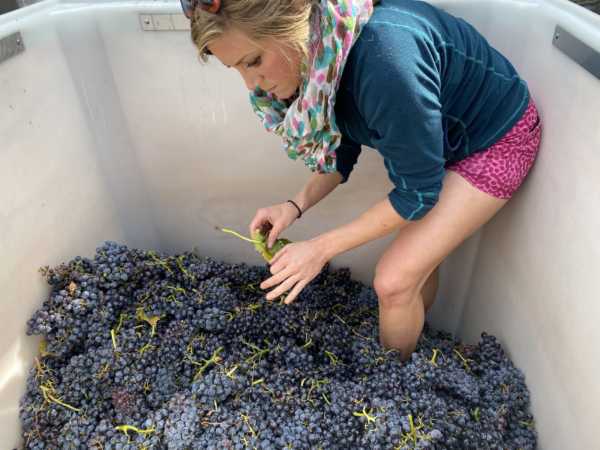